Visit Palm Springs is out with a new YouTube video featuring mostly short clips of people doing things that no one would ever do in the Coachella Valley (skateboarding by the windmills?) – and while you are used to seeing tourism marketing dollars spent on weird and unnecessary productions  –  the last few seconds of this particular video has me perplexed.

The full video is below, but here is the part that, ummm, well…

So yeah, I guess the thing that first comes to mind is…

Now hold on a sec, I need a deep breathe because, my God, man.

First, let’s just be glad no one got killed. “Oh, let’s put our pool inflatables in the back of our convertible and head out on the highway because what’s the worst than can hap..” *inflatable flies off onto windshield of driver behind blinding them as the drive into the Cabazon dinosaurs*.

Also, why is this guy driving in the middle of the damn road?

Oh, and there appears to be a dead end ahead, so where in the hell are they going?

Assuming for a second that these incredibly stupid and dangerous people aren’t driving into a dead end sign, why in the world do these dumbass people put their inflatables right back in the car the same way they were before?  Do the local marketing organizations need to spend those millions in tax dollars they get every year on videos explaining how to deflate inflatable pool fruit so we don’t all get killed by insanely dumb tourists?

Anyway, here’s the entire video.  Give it a watch – just try not to throw your phone out of rage. 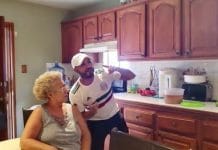 Beyonce will ‘switch up some things’ for Weekend Two, but you have to be there to see it