Goldenvoice, the promoter of the Stagecoach and Coachella music festivals, has an agreement with the city of Indio allowing them to host an additional two weekends of events – if they so desire. Seeing as how they make a boatload of cash off of the existing three weekends of festivals, and have the infrastructure in place, additional festivals seem a strong possibility.

While Goldenvoice has not commented on the possibility of the additional weekends, Indio Mayor Glenn Miller told the Desert Sun that he believes that a new event is “imminent” and said he hopes the events would be held in the fall.

But what kind of festivals would they be?

Well, they may not be a “festival” at all – rather just a big act playing a concert.

“We don’t have any plans to do any other festivals, but if you spend this money to do an [environmental impact report], we want the flexibility,” Goldenvoice Vice President Skip Paige. told the LA Times in 2013.  “If U2 wants to play a show, I don’t want to not be allowed to. We don’t have plans to do shows, but it is very possible.”

Goldenvoice’s head Paul Tollett told the Times that they were not rushing to find something, rather they were waiting patiently for the right thing, “We’re looking for ideas, but we don’t feel compelled, like there’s an emergency and we have to go do a show. If something pops up that’s natural and is fun for us to work on, we will.”

What do you think?  What major act or festival would you like to see added to Goldenvoice’s lineup at the Empire Polo Field in Indio?

Let it be known in the comments below.

I will go first, anything buy another jazz show in the Coachella Valley.  Seriously, anything else. 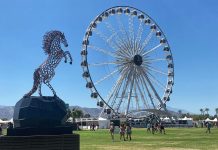