The Spring festival season is just around the corner in the Coachella Valley and, in addition to two weekends of Coachella and a weekend of Stagecoach, that means, if it is like last year, we are close to an announcement of Desert Trip, the sequel. So who’s performing? Well, some clues point to a possible performance by Tom Petty and the Heartbreakers.

Clue #1: the band is touring this year.

Clue #2: the band’s Facebook page posted this about a month ago (which I just became aware of, so newsworthy):

And while this could also mean the band will be performing another festival, such as KAABOO in San Diego, it just seems to make sense that Indio would be rocking out to “Refugee” and “Free Fallin'” come October.

We should find out pretty soon.  Last year, the lineup was announced for Desert Trip on May 3rd. 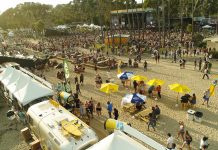