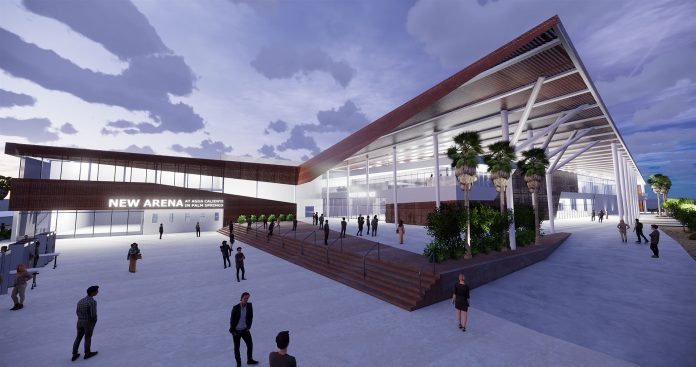 You have probably noticed that there hasn’t been much said about the Palm Springs Arena that was announced with a lot of hoopla last year and even began taking deposits on season tickets to a minor league hockey team that was to be housed there. Well, turns out the reason all has been quiet on the arena front is that everything screeched to a halt with the coronavirus and, based on some comments in the Desert Sun from those who proposed bringing the arena to Palm Springs, it sure seems like it might not be happening at all.

The $250 million sports and entertainment arena planned for downtown Palm Springs is on hold as the coronavirus pandemic continues, Tim Leiweke, CEO and co-founder of Oak View Group, a partner on the project, confirmed to The Desert Sun on Monday. The Agua Caliente Band of Cahuilla Indians first announced its plans for the ambitious project last June.

“Once we get past (the virus) we’ll make a decision if we’re gonna proceed,” Leiweke said. He did not specify when OVG might reevaluate, other than to say “when things begin to open back up.”

“We shouldn’t be the story and we’re not going to be the story,” he added. “We’re gonna let everyone stay focused on the virus. That’s where the priority should be.”

You catch the big “if” in that quote.

Like everything with the coronavirus, it’s not unexpected, but still crappy, unless you live in the neighborhood where the arena was proposed and were worried about the lack of any parking at the place, I assume.