The Sugarloaf Café and mini-market on Highway 74 above Palm Desert could reopen as early as this year.

The spot has been closed for about five years, but, according to the Desert Sun, Gabbi Rose, the owner of the Green Door hotel in Palm Springs, has signed a lease on the space and plans to have it open by the end of December.

We found ourselves a new project… more to come soon, and eventually BBQ and PIE shall be restored to Hwy 74.

Rose told the newspaper the food offered will be American Cuisine and BBQ, since they bought a huge smoker for the restaurant.  They also plan to open the market on the property.

Rose says she has plans to turn the restaurant into a popular destination, saying “This is going to become the Pappy and Harriet’s of the low desert.”

The cafe is lies on Highway 74, a little more that 15 miles from Palm Desert.  It originally opened in 1929, according to a recent sales listing.  As the Sugarloaf Café usually sees temps about 15 to 20 degrees cooler than the desert floor, it could quickly become a favorite for Coachella Valley locals looking to cool off a bit and have a meal.

Read more at The Desert Sun. 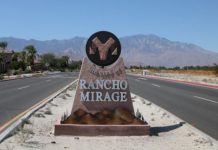 Grocery Outlet to open in Palm Springs this Thursday An IKEA store is coming to Ontario