A new study shows that Canadians only made up 4% of tourism spending in the Coachella Valley last year.

The study, paid for by the Greater Palm Springs Convention & Visitors Bureau (which operates mostly off of TOT tax dollars from hotels in the Coachella Valley), had the non-local Pennsylvania-based firm Tourism Economics look at the economic impact of Canadians on the valley’s tourism industry over a 5 year period, reports the Desert Sun.

Canadians comprise a little more than 2.2 percent of the total 13.6 million visitors to the Coachella Valley in 2017, spending about $5.5 billion. Overall, visitors had a $7 billion impact on the local economy with about $302.5 million of that generated by Canadians, according to the report.

To put that $302.5 million dollar in perspective, the three weekends of Coachella and Statecoach bring in $403 million, or $100 million more, to the desert every year.  And while 4% is certainly nothing to knock and tourism dollars from any group of visitors is always welcome in the Coachella Valley, it is odd that Palm Springs International Airport has so many Canadian flights and so few flights going to and coming from anywhere else. 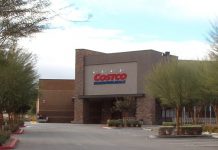 Has Donald Trump pissed off enough Canadians to hurt the Palm Springs economy? Terrible drivers of the Coachella Valley ranked by license plates