Southern California desperately needs rain, you know, because of that terrible drought we are in. And while it is nice to see nature bring a little precipitation to SoCal this weekend – one man is in charge of making sure the storm drops more of the wet stuff than it would naturally. That man is “Storm Boss”.

William Saunders, appropriately nicknamed “Storm Boss”, works at L.A. County’s Department of Public Works. His job: to extract as much water as possible from the rare storms that pass through Southern California to help increase runoff into reservoirs and underground aquifers around the Southland, reports NBC 4.
all.

“As a storm boss, of course I’m trying to always maximize the amount of storm water capture we can get from any particular storm,” Saunders told the TV station..

Saunders and his team accomplish this by a process using flares to send silver iodide particles into an already-existing storm cloud – which can produce additional water molecules. The process looks like this:

But, Saunders notes that no one, not even a storm boss, can make it rain (except for maybe in rappers in a strip club) – rather the process just makes it rain a bit more than it would normally.

“It’s a misconception that we can actually make rain. You can’t make clouds. What this equipment will do is it will take small and medium storms and juice about 5-to-10 percent more rain out of existing storms. I can’t create storms,” Saunders explained. 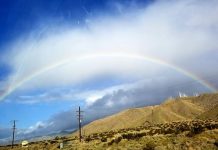 It’s official: The Coachella Valley saw a fuckton of rain in the last year