The first of several segments filmed in the Coachella Valley for Diners, Drive-Ins, and Dives premiered on Friday night. The episode began with Guy Fieri rollin’ out to Sherman’s Deli and Bakery in Palm Desert (near Palm Springs) for his Food Network show. Here’s a recap.

The episode starts with a montage of Palm Desert, ummm, let’s say landmarks. I always find it intersting and sometimes odd what producers of these shows choose to feature… After the montage, we find Guy Fieri in the parking lot of Sherman’s Deli in Palm Desert – which he says he discovered while in the desert for an “awesome concert” – which only made me sadder about Desert Trip not happening in 2017. From there, we see a nice montage of food, hear from happy customers, see Sherman Harris’s Palm Springs star, meet Janet and Sam who now run the joint, and are introduced to longtime chef Gordon Poster.

Guy heads to the Sherman’s Deli kitchen with Gordon and the two begin by baking up some of Sherman’s delicious rye bread – which they prepare in-house and make up to 100 loaves a day: Oh how I love you bread! Guy loves this bread too too.

From there, the duo prepare the turkey pastrami – which is a two day process (24 hours of brining followed by 24 hours wrapped up in spices, followed by it’s final destination: the smoker). 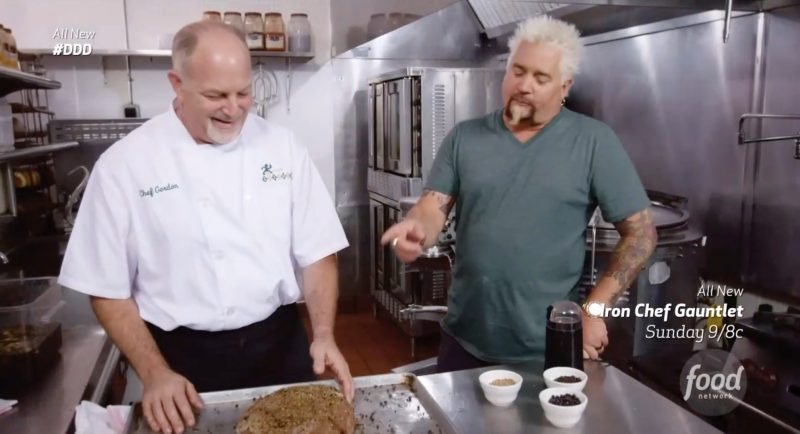 And when the two are combined, well… This sandwich very much pleases Guy:

The show goes to commercial break and comes back with brisket served in between latkes -this leads to the screwball comedy portion of the show:

Then, it is on to the brisket!

And oh man does it look good.

OMG!!!   Look at this latke sandwich with half a pound of brisket! This might surprise you, but Guy also likes this one:

“I’m going to take the floorboard out of the Camaro and just Yabba, Dabba, Do at home,” says Fieri after taking a bit.

From there, we get a peak at the Sherman’s Deli desert case – which looks fantastic
: Then Guy closes things out at the deli with some high praise, calling Sherman’s a “gem” and “outstanding.”

If you want to check out Sherman’s, they have two locations in the Coachella Valley: