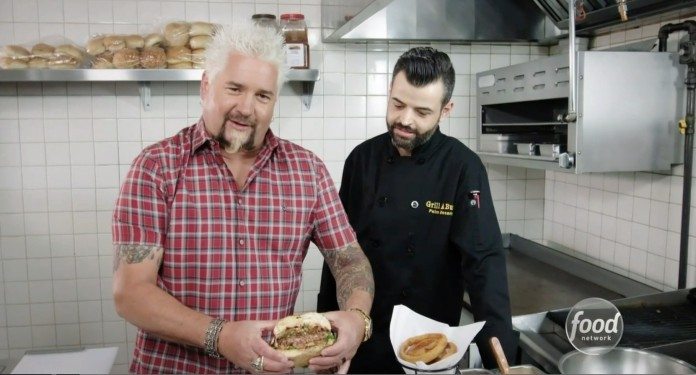 The second of several segments filmed in the Coachella Valley for Diners, Drive-Ins, and Dives premiered on Friday night on the Food Network. Grill-A-Burger in Palm Desert (about 15 – 20 minutes east of Palm Springs) was featured as the second of three restaurants on the show.  Here is a recap.

Like the previous episode featuring the Coachella Valley, this one starts with a desert montage:

From there, it is on to the burger joint to meet the owners, the Nurani family… …who heads to the kitchen to make the Devil’s Revenge Burger with our favorite frosted tipped host.

They start with the habanero relish.

And, yes, you guessed it: Guy thinks it is spicy.

Those all go on the burger (and yes, your butt already hates you if you are even thinking of eating this thing).

Though, it does look pretty damn good! The burger ends up with, as Guy calls it, a “really well rounded heat” and a “dynamite burger” – and for this, Guy offers up the second highest of compliments: a fist bump. From there, owner Salima Nurani takes over in the kitchen to make the Buddha Burger – a turkey burger with a lot of different seasonings. And he likes the taste of it so much, he offers up the highest of compliments: a high five.

And ends things with an unprecedented second fist bump.

Which is well deserved, as Grill-A-Burger is pretty darn delicious.