A Michigan photographer is taking to the Internet to find a a newly engaged couple he snapped a photo of while hiking in Yosemite National Park.

Matthew Dippel and a friend had hiked to Taft Point to take photos, according to Your Central Valley. The pair planned their hike so they could grab some pics during sunset on Oct. 6, which they did – but, they also got a bonus: this amazing photo:

A truly magical moment. Idk these people but maybe we can find em!

Dippel was all set to take a pic of his friend who was walking to the point when he saw the couple walk out to the ledge.

“I had my settings all ready to go, due to waiting for Josh, so I just snapped away and managed to get a beautiful photo,” Dippel told Mashable.

Dippel tried to find the couple after, but had no success. So now he has taken to social media to find them in hopes of giving them a nice gift.

“Honestly I’d like to give them just a big print of the photo because it’s such an incredible moment,” Dippel said. Well, here’s one way to enjoy the Super Bloom without having to deal with the crowds 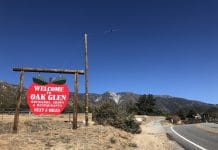 Oak Glen apple picking | What you need to know Did anyone at Coachella ever look up from their phone?