Sure, you have heard that the Coachella Valley is hot. But, there is so much more to Palm Springs weather. The Southern California desert has a unique climate that see can see super strong winds, a 10 minute storm that can flood the whole city, and it can even get quite cold. Yes, the Palm Springs area has a lot going on when it comes to weather. Here are five things to know.

It doesn’t just get hot. It gets really, really hot!

During the summer months and even as early as March or April, the Palm Springs area gets hot.  Yeah, yeah.  It’s a desert and so this makes sense.  But, you really haven’t lived until you have been on the asphalt on a 122 degree day (there were 4 of those days in 2017 btw).  During the summer, finding a shady spot to park your car is like finding buried treasure.  Simple things that you might take for granted elsewhere like not burning your hand on your metal seatbelt are suddenly a big deal.  But, on the bright side, you get to impress everyone with your dash thermometer posts.

The weird thing about Palm Springs weather is, as hot as it gets (and it gets freakin’ hot), it’s usually business as normal in the desert.  It’s not like a blizzard elsewhere when everything closes down.  The stores stay open, road construction still happens for some reason (seriously, give those guys the summer off already), and there’s usually one or two idiots who think it’s a good time to go hiking.  Don’t be one of those people.

It also gets pretty cold Winter in the Palm Springs area can be hilarious.  Locals, who know it gets cold, have things like jackets and closed-toed shoes for these days, but tourists often come completely unprepared – choosing instead to only pack swim trunks and flip flops.

Average temperatures in December and January see nighttime lows down into the 40s and there are days where it goes well below that.  In fact, it has even snowed in Palm Springs!!

Dry air cools down much faster than in a humid climate, so it can go from nice to pretty chilly fast. So yeah, be sure to check the forecast and pack socks and a jacket.

The founding fathers of Palm Springs and other Coachella Valley cities were clearly more interested in building a million golf courses than building any sort of drainage system.  Things have gotten better over the years, but quite a few roads are almost guaranteed to be closed (I’m looking at you Vista Chino) down because of flooding the dozen or so times a year that a storm brings more than a chance of rain.  And, when those roads are closed, don’t try to drive through them like a moron.

Most of the time, any and all rainy weather will stop at the pass at or near Cabazon, but not all of the time.  Yeah, sometimes it actually rains in the desert and, occasionally, things get real bad real fast, so be prepared.

Also, if you happen to be a tourist, the locals know you’re angry that your vacation is not what you thought it would be, those who live in the desert never get to see rain, so let us act like crazy people in peace.

Those Windmills are there for a reason 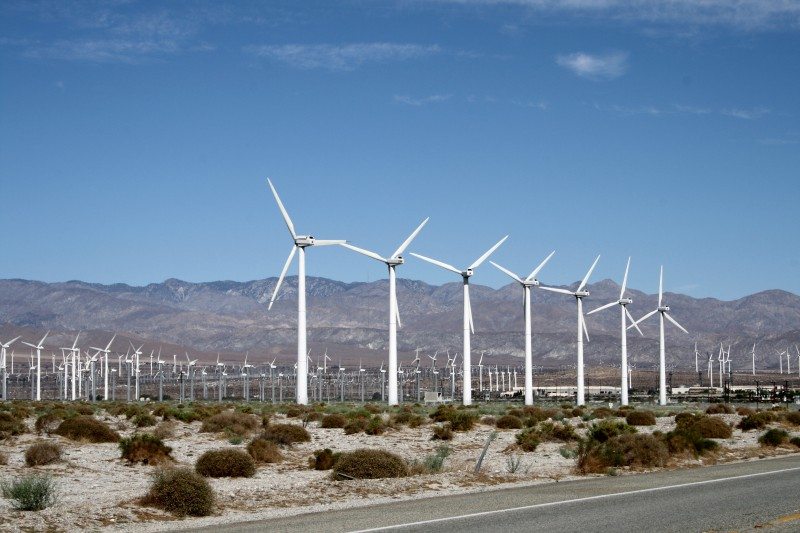 So they are actually not windmills, rather they are wind turbines.  But that’s not really the point.  The point is that they built all those things in the San Gorgonio pass leading into Palm Springs for a reason: it’s flippin’ windy out there.

Bottom line: when the winds come, and the always do, have all of your patio furniture tied down or it’s going to end up in your neighbor’s pool.  Also, if you don’t have to drive, don’t.  That wind combined with sand can make visibility awful.

Palm Springs weather can be unpredictable

I have lived in the Coachella Valley now for over 20 years.  The one thing I have learned about Palm Springs weather is anything can happen at anytime – well, ok, it’s not going to snow in July, but you get my point.

Just be ready for anything and check in on the forecast every once in a while since it’s right there on your phone!