If you have spent more than a couple of months living in The Coachella Valley, then you have probably heard rumors of Munchkinville: a compound, built in the hills above Palm Springs, comprised entirely of little people (mostly from The Wizard of Oz). But, is it a real thing?

KMIR viewer Mike Garcia was so enthralled with tales of a tiny-person colony, that he was compelled to email news anchor Janet Zappala and brilliant tweeter Gino Lamont. 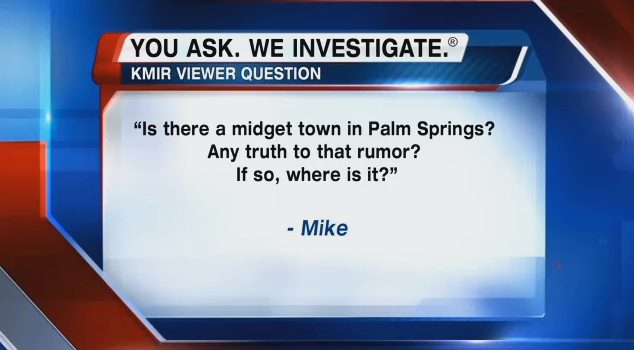 Not concerned at all about why Mike would be looking for this place (or what he would do if he found it), KMIR investigates by contacting The Palm Springs Historical Society (and probably waking them up from their nap).

The organization then squashes the rumors explaining that everything you have heard is not true and that The Wizard of Oz cast could never have settled there –  due to the fact the house was built in the 1920s and The Wizard of Oz did not come out until 1939.