A Dana Point bar is getting attention for a Cinco de Mayo party they threw which included an inflatable border wall and “Green Cards” that were used to get drinks.

Hennessey’s Tavern encouraged customers to climb up the inflatable wall to get the “Green Card,” which featured a cartoon woman named Isabel Orlando and entitled anyone with one to a free drink. Many people have complained about the promotion online, saying that is was racially insensitive. But the bar’s owner says it was all about creating a conversation.

“Our intentions were to create a dialogue and show how ridiculous that it is to spend tens of millions of dollars to build a wall and even infer that Mexico foot some or the entire bill and have their citizens build it,” Bar owner Paul Hennessey wrote on Facebook (via ABC 7).

“This event obviously struck a chord with many of you out there and you and a number of you did not understand our intent. I encourage all of you to take the time that you have spent posting on social media to spend an equal or greater amount of time writing your congressman or the President himself to express your concerns just as I have.”

Not many people agreed with many voicing outrage in the comments of the post:

“This is a pretty frightening time when families are being broken up,” Barragato Gibson, told the LA Times. “Some bar thinks that this is funny? There’s nothing funny about this at all.” 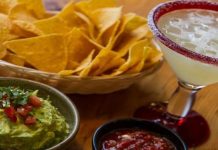 Palm Desert will have DUI checkpoint on Cinco de Mayo