A 28-year-old man is dead after police say he attempted an illegal stunt on the 15 Freeway in Corona this weekend.

The Ruthless Ryderz motorcycle group was traveling north on the freeway near Weirick Road on Sunday morning when Leslie Elliott, of Garden Grove, stood up on the seat of his Kawasaki, reports the LA Times. Elliott lost control of the bike, then tumbled off of it and onto the road.

Elliott, who was wearing a helmet, suffered major head trauma and was pronounced dead at Corona Regional Medical Center.  According to a GoFundMe page, Elliott leaves behind a 5-year-old son.

According to police, Elliott’s motorcycle was taken away from the scene and hidden at a nearby gas station by members of the Ruthless Ryderz – who were “not cooperative” with police.

The Press Enterprise reports that following the crash, other motorcyclists blocked the lanes of the freeway causing traffic to backup for more than four miles. . 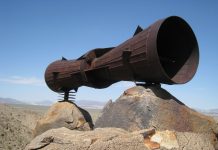