Midici Neopolitan Pizza has closed its location at the River in Rancho Mirage just eight months after opening.

The spot, located next to Starbucks, closed up shop earlier this month (I know, I know…a little late on posting about this but this month has been a busy time). A posting on Facebook blamed a “waterfall coming from our ceiling and the terrible HVAC unit that we were provided” along with lagging sales as reasons for the closure.

MidiCi had opened in April at the location that was once home to Baja Fresh.

The restaurant had averaged 4 out of 5 stars after nearly 100 reviews on Yelp. It joins the Coachella Winery as having closed at the River in Rancho Mirage in 2018. Can furniture and design stores save The River at Rancho Mirage? Forever 21 releases list of potential store closures, including The River at Rancho Mirage 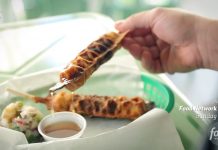 The Yucca Valley Sizzler has closed