The Kardashians, who are a family that I have never before attempted to keep up with, aired the episode they filmed in Palm Springs a few months back on Sunday night. As it was a local thing, I figured why not do a little recap of what the family who is famous for being famous did while in the desert.  It was an hour of television that felt like 30.  But, hey, here’s a recap of it.

Do note, this recap will not include the episode’s subplots which involved Kris Jenner possibly fertilizing her eggs and Rob Kardashian getting some sort of mental and physical fitness trainer. There was also a a charming tidbit about Kim not cleaning baby urine off of her so as not to ruin her fake tan. With that, let’s get onto the recap.

I suppose I should first explain why the Kardashian sisters make their way to Palm Springs.  Other than some frequent product placement for the Parker hotel, the story goes that Khloe is returning to So Cal from somewhere and her sisters Kim and the one who is not Kim or Khloe want to take her out to the desert for a girls weekend.  Khloe is not interested at first, because there needs to be some kind of drama in this show, but then agrees to go and the trio is on their way. 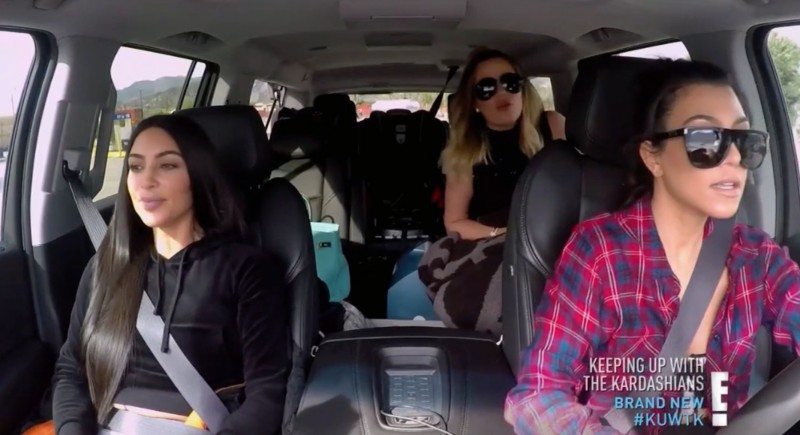 As the Kardashians make their way to the Coachella Valley, they first stop at the Cabazon Dinosaurs – a place they have always wanted to stop, which is understandable. They walk around the dinos for a bit and take a jumping photo that may contain the least amount of lift any jumping photo has ever had.

From there it is on to Palm Springs, home of a giant banana statue…

After arriving in Palm Springs, Kim proclaims how happy she is that the sisters (and their reality TV show camera crew) have so far been successful in coming to the desert and avoiding the paparazzi by arriving in “unmarked” vehicles.

They then proceed to get into this car to cruise around town in because, you know, they want to be inconspicuous. Bonus: it is also a car that the one who is not Khloe or Kim has any idea how to drive.

And this is where the show gets super believable.

You see, even though the trio of sisters is clearly being followed by several vehicles from the reality show film crew, none of them are able to assist the trio when they “break down” on Highway 111 – leaving Kim and Khloe to push the car somewhere for some reason that I am sure is not just to put in the show’s promo.

It’s really not clear what the hell happens from there with the car – but somehow, the trio arrives at The Shops at Thirteen Forty Five and, judging by how dark it has become outside, it took them several hours to travel a couple of miles. Maybe they walked? Took the Buzz? We will never know. Once inside, Khloe has a conversation with an imaginary friend named Cornelius and ponders whether or not to buy an art piece that, while blurred out, appears to be a guy dressed in S&M leather. After fighting back the urge to turn the channel to literally anything else – I would have taken Quacker Factory on QCV over this show at this point – I see that the sisters have returned to the Parker and Kim has chosen to go to sleep early as, in her words, that’s what people do in Palm Springs. But Kim is not allowed to sleep because this show still has 20 minutes of time to fill! So, the trio play games and jump on the bed for five minutes.

The next day, the sisters get back into their incognito ride and, miraculously, there are no mechanical issues – which is probably the result of Khloe, and not the one who is not Khloe or Kim, driving. The Palm Springs portion then concludes with the Kardashian sisters making a surprise stop – that was clearly planned by production crews weeks in advance – to the home they used to visit their grandparents in, but is currently owned by a man named Scott who, 1) looks totally shocked to see the Kardashians make a “surprise appearance, and 2) lets them walk around and reminisce. No, seriously. That was the end of the Palm Springs stuff.