An Indio judge ruled on Friday that the #PouGhazi charges against former Palm Springs Mayor Steve Pougnet and developers John Wessman and Richard Meaney were not too old to be prosecuted.

All three then plead not guilty to the charges against them.  You can read more about the legal aspects of what happened today over at the Desert Sun, but all you really need to see is this photo taken by photographer Jay Calderon and posted by reporter Rosalie Murphy, which basically tells you everything you need to know.

Judge throws out defense's argument that alleged bribes in Palm Springs are too old to be prosecuted https://t.co/HTVHMLmJHw pic.twitter.com/42zLYB5KzV 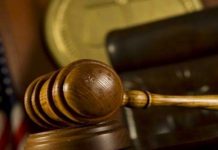