A 64-year-old Wisconsin man was featured on the news this week for an odd accomplishment: eating his 30,000th Big Mac.

Now, I know what you’re thinking. Was he trapped inside of a McDonald’s and had to eat the restaurant chain’s trademark item in order to survive? Nope. He he’s just a dude who has been ordering Big Macs just about every day since 1972.

It’s one for the history books. He’s done it. Local folk hero Don Gorske has eaten his 30,000th Big Mac. Let the record show it took place 3:30pm at the Fond du Lac @McDonalds. He cautions this may be his last milestone, projecting 40,000 would come in 2032. #SuperSizeMe #WISN12 pic.twitter.com/4rJ5lTCYui

Don Gorske scarfed down his 30,000th this past week, according to the Fond du Lac Reporter. Gorske says he’s only missed about eight days in between due to a snowstorm shutting down his local Micky D’s in 1982 and the day his mom died in 1998.

“She requested I not eat a Big Mac on the day she died, in remembrance of her,” he says. 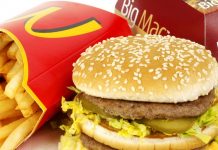 Coachella Police searching for man who robbed Castañeda’s at gunpoint