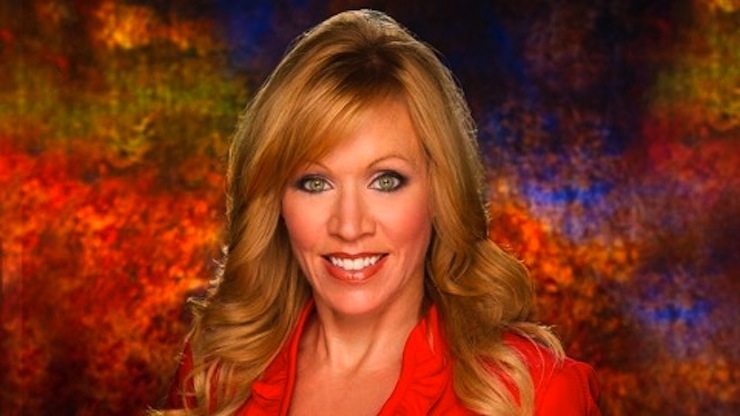 The move was announced to KESQ / Local 2 staff on Tuesday and Jeffries no longer appears on the KESQ website.  KMIR confirmed the move (see press release below) and noted that Jeffries will start on the station in mid to late September.  No word on the fate of KMIR’s current work-from-home weather guesser or who will be stepping in for Jeffries on the “First Alert Weather Team” (Update: Geoff Fox will remain on KMIR until Jeffries begins in mid-September).

Jeffries is perhaps best known for hating poultry jokes and creating her forecast alongside a law breaker on top of the KESQ / Local 2 rooftop in soon-to-be-pulled station promos.

Mike Stutz, General Manager of Gulf-California Broadcast Company, said in a statement, “We thank Ginger for her many years of service.”

UPDATE: Here is the press release from KMIR:

Jeffries joins KMIR after spending 19 years at KESQ-TV in Palm Springs. She was voted Best of
the Best in Coachella Valley weekly, and is a multi-Emmy award winner.

“I am ecstatic to join the KMIR News Team! Their commitment to the community and
responsible news coverage is something I admire. This is a professional goal come true for
me!” said Jeffries about her switch to KMIR.

Jeffries began her broadcasting career in Eureka, California. Stops include Redding, San Diego,
Philadelphia and finally Palm Springs where she has called the Coachella Valley home since
1996.

Meteorology, plate tectonics and atmospheric study have been long time passions for Jeffries.
She graduated with a Bachelors of Arts and Sciences from San Diego State University with a
degree in Journalism. Since then, Jeffries has served as Chief Meteorologist in the Coachella
Valley for nearly two decades and hopes to earn her PhD. “Dr. J just has a nice ring to it.”

Gene Steinberg, VP / General Manager of KMIR stated that “We are honored that Ginger
recognizes the commitment to local news and weather that KMIR NEWS brings to the Coachella
Valley and we are thrilled that Ginger is making the switch to KMIR NEWS”

Ginger Jeffries can be seen on KMIR NEWS beginning in September.