A flight from Honolulu to Los Angeles turned around and returned to Hawaii after a fight broke out between two passengers.

The Hawaiian Airlines flight was over two hours into its trip, when the the captain made the call to return to Honolulu due to “unruly passengers,” according to KHON.

“I heard a bunch of shouting coming from behind me — about three rows back. Some dude was in another dude’s face telling him to *expletive* off,” passenger Justin Moore-Brown told Hawaii News Now. “I just heard yelling. It started quietly and I turned around and they were in each other’s face already.”

Police were waiting for the flight when it returned. The plane eventually took off again and arrived in Los Angeles about 4:30 am Wednesday morning. 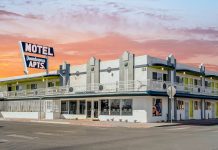 The Millennials really want to come to Palm Springs in 2019