Home Desert Life Cabazon Dinosaurs | Everything you need to know 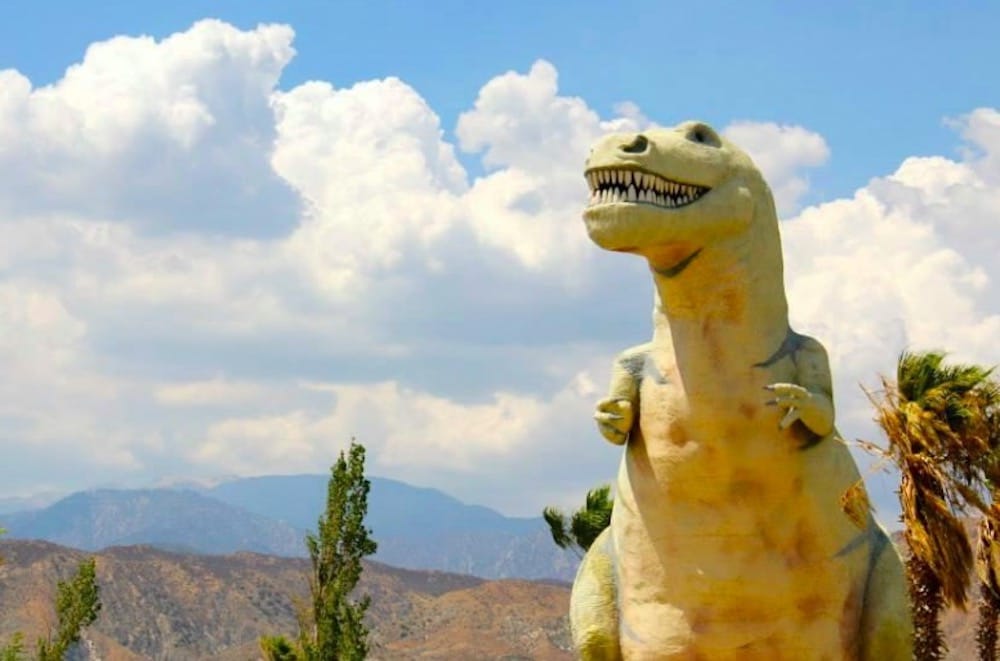 Yes, friend. There are dinosaurs just off the 10 Freeway on the way to Palm Springs. But why? And what are the Cabazon dinosaurs all about. Well, here are five things to know about the unique Southern California roadside attraction.

What are there Cabazon Dinosaurs?

20 minutes west of Palm Springs, in the small community of Cabazon, you will find Dinny the Dinosaur and Mr. Rex hovering over the north side of the freeway (on the left when you’re on your way to the Coachella Valley). Dinny is a 150-foot-long Brontosaurus and Mr. Rex is, you guessed it, a 65-foot-tall Tyrannosaurus Rex.

The statues are the brainchild of Claude Bell, who had been a sculptor and portrait artist at Knott’s Berry Farm. Bell began construction on the dinosaurs in 1964 because he wanted to have something to promote his restaurant, the Wheel Inn (“Be sure an’ tell ’em Large Marge sent ya’!“).

Dinny took 11 years to be completed at a cost of $300,000. Mr. Rex was not finished until the 1980s and , for a brief time, had a huge slide going down its tail. But, because nothing can be fun anymore, the slide was filled with concrete.

Bell died just after the completion of Mr. Rex in 1998.

Since his passing, Bell’s family sold the property. The Wheel Inn shut down in 2013 and bulldozed in 2016. The dinosaurs remain and now include a roadside creationist museum and gift shop inside of Dinny.

The dinosaurs are in the small community of Cabazon, California. You can see them from the freeway, but you should really just plan on taking five minutes by getting off and checking them out up close at 50800 Seminole Drive.

While you’re in Cabazon, you might want to head west a few minutes and make a stop into Morongo Casino Resort Spa and, perhaps more importantly, relatively cheap gas and an In-N-Out Burger. There is also Hadley Fruit Orchards – where you can grab a date shake (you should, they are good), food, and touristy stuff – and a huge amount of outlet stores that get crowded af during weekends and holidays.

Also, don’t skip out on the delicious tacos.

Do I have to pay to see the Cabazon Dinosaurs?

Yes and no. You see, the Cabazon Dinosaurs are so damn big, you can just pull into the parking lot and take all the pictures you probably want. You can also walk into Dinny’s belly to see the gift shop and some creationist stuff in the “museum”.

If you want to do more, you can plunk down $13 for adults and $11 for kids and head into Mr. Rex’s Dinosaur Adventure – which includes a dinosaur exhibit featuring over 50 “lifelike” dinosaurs, a dinosaur dig, fossil panning, and access to climb up inside of Mr. Rex’s mouth.

Wait, didn’t I see the Cabazon Dinosaurs in a movie once?

Yes. They were a big deal during the 1980s. They appeared in tv commercials and that Fred Savage video game movie “The Wizard”:

But, by far, the biggest moment for the Cabazon Dinosaurs came when they appeared in  in “Pee Wee’s Big Adventure” – along with the Wheel Inn (see Large Marge reference from earlier).

Sorry about the potato quality of this clip:

Where can I get more information?

You can get more info at the Cabazon Dinosaurs website.

Have fun at the Cabazon Dinosaurs – and take some good pics!